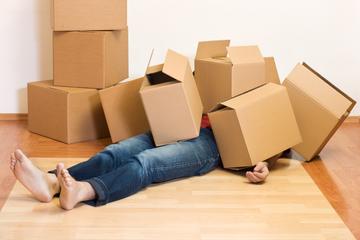 Reduce the Stress of Moving

Selling a home is stressful. Moving might be just as bad. Unfortunately, everyone who successfully sells a residence will eventually have to move to a new one.

Moving is never a stress-free event. In fact, officials with the Employee Relocation Council rank moving as the third most stressful event in a person's life, trailing only death and divorce. But there are steps people can take to lessen the pain of a residential move. They need only plan, plan, plan. When moving day arrives, they'll be happy they did.

U.S. residents today move quite often. According to the U.S. Census Bureau, about 17 percent of the country's population moves each year. No other country comes close to matching that percentage. Officials with the American Moving and Storage Association, based in Alexandria, Va., say that almost half of the residential moves in the United States take place from the beginning of May through Labor Day.

That means there's the potential for a lot of stress out there as families move from apartments to their first homes, or as senior citizens downsize from their four-bedroom home to a two-bedroom condominium in the suburbs. Fortunately, moving pros have lots of advice for eliminating many of the headaches associated with a move.

Those homebuyers or renters who plan to move themselves should reserve their moving truck as early as possible, calling local truck-rental companies as much as two months before their scheduled moving date. Those who are hiring professional movers should also call as far ahead of their moving day as they can. This is especially true for those moving in the summer, at the end of the month or on a weekend, times that are especially busy for the moving industry. People who wait too long to call for a truck or a moving company might find nothing available, especially in busy markets such as certain North Side Chicago neighborhoods. Those who wait until the last minute may also end up paying more for their trucks or movers than they would have had they called two weeks or months earlier.

People should also begin searching for moving supplies as early as possible.

Another piece of advice? Those moving should not wait until the last minute to call the phone company, utilities and garbage pickup services to switch these functions to their new residences. Some of these services can take a week or more to transfer to a new residence. No one wants to be stuck without telephone service for several days while trying to adjust to a new home.

Much of the stress from moving comes when people pack improperly. When moving day is done and people are already exhausted and cranky, they're then forced to search through poorly packed boxes looking for bed sheets and toothbrushes that have seemingly evaporated. That's why real estate agents always advise their clients to start packing as soon as possible, often asking them to do this before they've even sold their current homes.

Movers should also take care to never pack too many things in their boxes. The temptation is always there to fill a box with as many things as possible. Unfortunately, doing this often leads to injuries when it comes to actually pick this stuffed boxes up.

People should also refrain from placing items from many different rooms into one box. It's far easier at un-packing time if each box contains items from only one room. People can then mark on the boxes where the items inside belong. It'll then be far easier to find the dining room dishes or the bedroom clock.

Moving experts recommend that people color-code their boxes, picking, say, blue for the master bedroom, red for the living room, brown for the kitchen and so on. This way, movers and friends or family members can easily place boxes and storage bins in the right room without having to constantly ask where things go.

It helps, too, to fill one box with the items you're going to need as soon as your move is over. This box of essentials should be the last one on the moving truck and the first off.

Break the Move Into Steps

The task of moving a family and all its belongings from one home to another can overwhelm even those folks who are normally well-prepared for any event. The key to taking the stress out of a move, though, is to break it into easier-to-manage steps.

Moving experts recommend that people approach the move as series of the following steps: First, people have to find a new place to move to. Secondly, they have to tackle the financial problems brought on by the move, whether it's taking out a mortgage loan or taking out new insurance. Next, they must handle the actual move itself. Finally, they have to settle in, transforming their new residence into their new home.

When people break a move into its parts, it forces them to begin planning early, thus eliminating as much of the stress involved in moving as possible.